The year was 1972. 6000 U.S. troops were still in Vietnam. President Nixon visited China and the Soviet Union. A Sunday in Northern Ireland became known as “Bloody Sunday.” A PLO group held Israeli athletes hostage at the Olympics and later killed them. NASA launched the last Apollo mission to the moon. The EPA banned the use of DDT. Five men burglarized Watergate. The Equal Rights Act passed in the Senate. President Nixon signed Title IX. American Bobby Fischer beat Soviet Spassky at chess. Federal Express and Home Box Office (HBO) were started. The videogame, “Pong,” was released. And Nike running shoes hit the market. 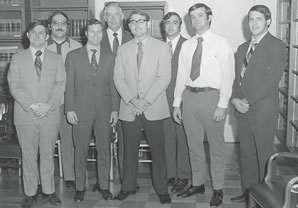 The chapter was modest back then. The first meetings were held in the Wilmington Room on the 14th floor of the Seaboard Coast Line Railroad building, known today as the CSX building, where members helped themselves to a buffet lunch and then convened in a private meeting room to discuss and debate various topics in federal practice. No more than 20 members usually attended the lunches, with most from the United States Attorney’s office or in admiralty practice. Among those members were Schlesinger, Peter Dearing, Manuel Menendez, Howard Snyder, Ernst Mueller, and Jim Moseley, Sr. They may not have known it back then, but they all would become influential and well-known judges and lawyers, from which the inference perhaps may be drawn that they were really learning something at those meetings.

Archibald Thomas and Howard Skinner organized the chapter’s first CLE program with Stephen Saltzburg as the keynote speaker. At that time, Saltzburg was a professor at University of Virginia and already well-known in legal circles for his evidence acumen. Saltzburg agreed to speak in exchange for airline tickets for his wife and himself, a rental car, a couple of nights at a hotel on the ocean, and the promise to use his book as course materials. The chapter made a profit in part because Thomas—ever savvy with finance—rented the promised car from the old “Clunkers” on Phillips Highway. Today, Judge Schlesinger cannot remember what he learned from Saltzburg, but he can remember specifics of the rented clunker.

And so, from those humble beginnings, our chapter grew and grew. Meetings were moved from the Seaboard Coast Line Railroad building to the old downtown Robert Meyer Hotel, which later became the old downtown Holiday Inn, which later was demolished to make room for the new Bryan Simpson United States Courthouse. 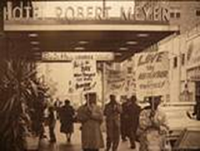 In 2004, the chapter organized the first Honorable Ralph W. “Buddy” Nimmons Federal Practice Seminar in honor of its late namesake who supported the chapter and epitomized the highest ideals of federal practice. The seminar became a signature annual event for the chapter, taking place in the courthouse so that members could learn in the venue where they practice.

Skipping some years, that brings us to today, when, although a decade into the 21st Century, the chapter has decided to launch this website and capture some of this history. We’re not so far from the past though: people still wear Nikes, Judge Schlesinger is still an active member and supporter of the chapter, the CSX building still stands, the Nimmons seminar is still our signature annual event, and we still try to save money in creative ways when organizing CLE programs.